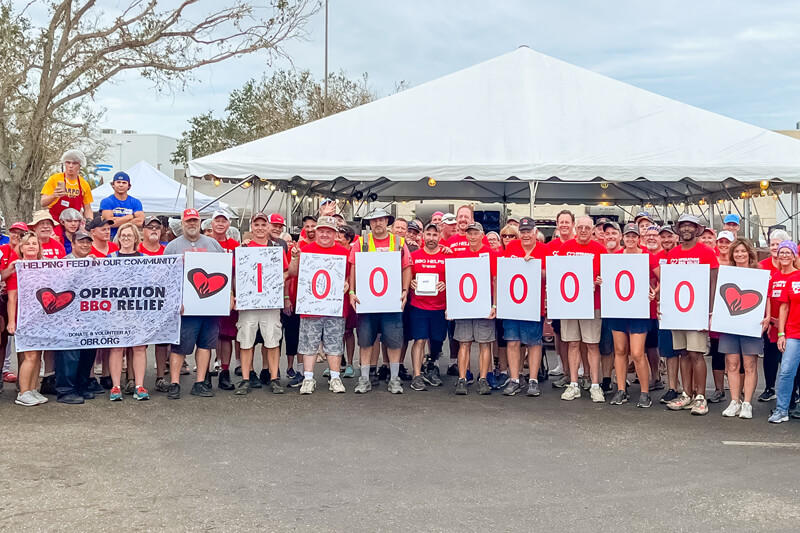 Message from the Co-Founders

Operation BBQ Relief hit the 10 millionth milestone on October 10th.  As I reflect about reaching our 10 millionth meal, I think back to the very first meals that we cooked following the Joplin tornado. We were just a group of competition pitmasters that wanted to make a difference in the community.

I was in Port Charlotte, FL with our team as we handed out the 10 millionth meal and it was amazing to witness the dedication and camaraderie of our volunteers – volunteers that were volunteering for the very first time and volunteers that were with us for a 10th deployment. When we first started Operation BBQ Relief, our goal was to feed the community following natural disasters.  After serving over 10 million meals, we are honored to witness how a hot meal has not only impacted the recipient but also the lives of volunteers and staff preparing the meals and handing out the meals. The emotions, the gratitude, the Operation BBQ Relief experience has been our driving force since day 1 in Joplin. We are honored not only to have celebrated 10 million meals but also to pass on this legacy of being a force for good to thousands of supporters along the way.

We have served the one hot meal that matters over 500,000 times since Hurricane Ian hit. That makes this deployment the second largest we have done since May 2011. It appears we will be in Florida a few more weeks. As you might imagine, many people are still without power and the islands off the coast will take years to rebuild.

Thank you for your support to help reach the 10 millionth meal milestone and serve over 500,000 hot meals to communities following Hurricane Ian.

Please donate or register to volunteer at OBR.org and share our social media pages @opbbqrelief.

The one hot meal that matters given out 10 million times!

It took every volunteer, employee, and supporter to reach this milestone.

Volunteers are the heart of Operation BBQ Relief.  I hope you each know that without your sacrifices, this doesn’t happen.

Without each employee, Operation BBQ Relief would not be here.

Without each supporter, Operation BBQ Relief wouldn’t be able to get the one hot meal that matters to the one person that needed it.

I’ve experienced a lot of things in my life.  One of the things I’m most proud of is Operation BBQ Relief.  What we’ve accomplished, the people I’ve met, the people that we’ve helped.

My hope is that each of you feel proud of yourselves for taking time to care for those you may never meet.

The One Hot Meal 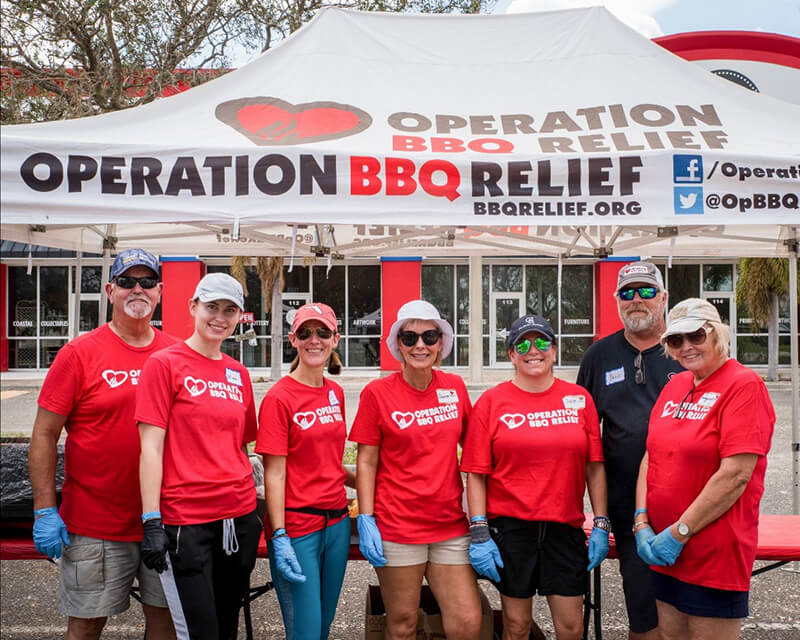 “I was getting dropped off at the airport in Sarasota to head back home to Missouri after a long week of 6 AM mornings and some late nights of cooking the one hot meal that matters. I made it through security and had two hours before my flight home. I decided to walk into one of the airport restaurants here and get some breakfast and a drink.

I sat between two gentlemen, one who made conversation about why we were traveling. I explained that I’m from Missouri and came down to help cook meals for disaster survivors and first responders.  The other man sitting next to me overheard our conversation and with tears in his eyes, offered to buy my drink and breakfast.

We started talking and he was from Englewood, FL. He told me that he lost everything. His car, RV and home were completely gone. He had been bathing in the ocean and staying in a home that was barely standing with a gun laying on his chest because the looters were tearing through his neighborhood. He didn’t care about what possessions he had left.  He was just scared for his life. He did not know where his next hot meal was going to come from or where he was going to go from there. He heard that there was an operation serving individual meals out of Englewood, FL and made it to the meal site that Operation BBQ Relief was set up. Our meal was his ONLY hot meal. He had finally made it to the airport to fly home to New Jersey to be with his family.  He was leaving what was left of his life here in Florida behind.

After slipping the waiter my card for both tabs, I stood up and gave him a hug in the middle of the airport. I do not know his name, but he will forever have a place in my heart.

The experience reminded me again why we do what we do here at Operation BBQ Relief.

This week, Operation BBQ Relief hit our 10 millionth meal since 2011 when the Joplin tornado hit.  I am so happy to be a small part of something so amazing.” 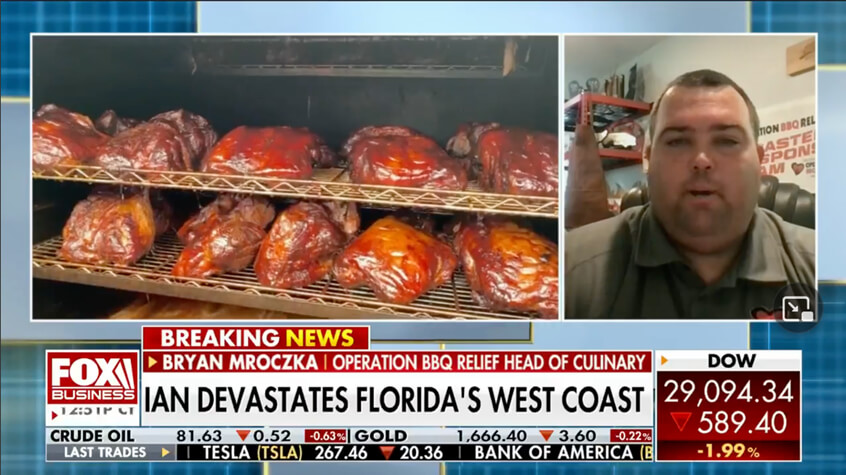 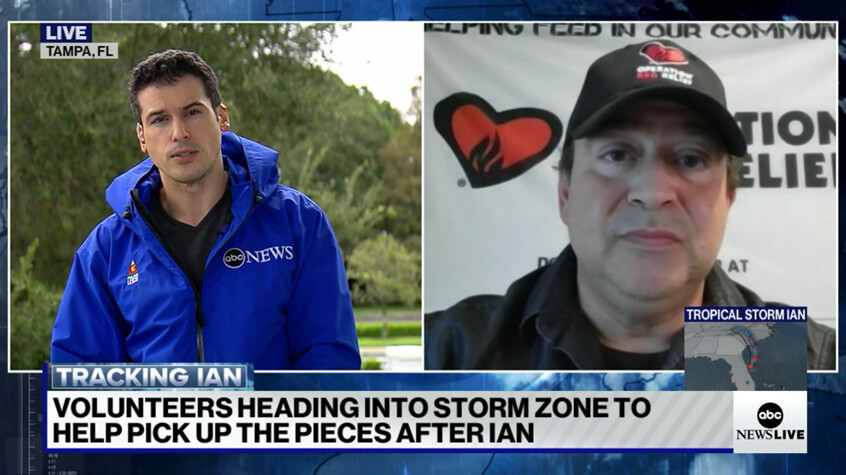 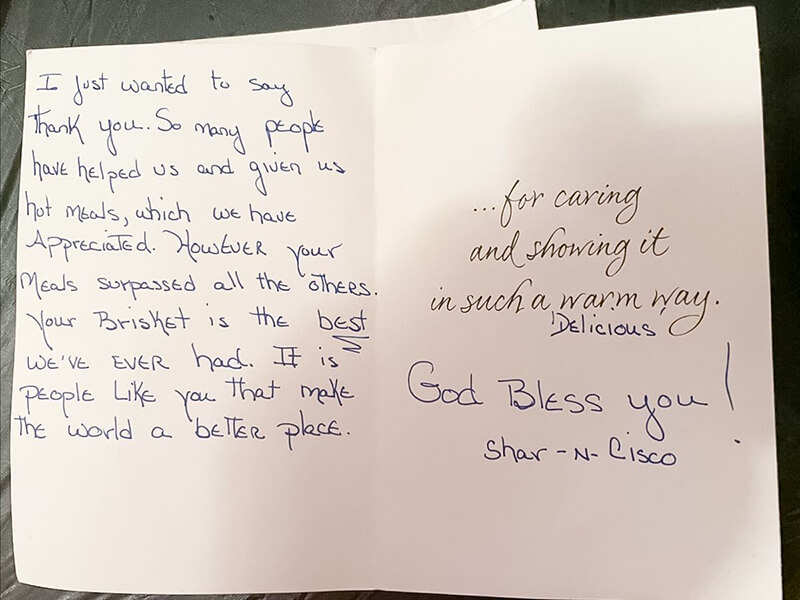 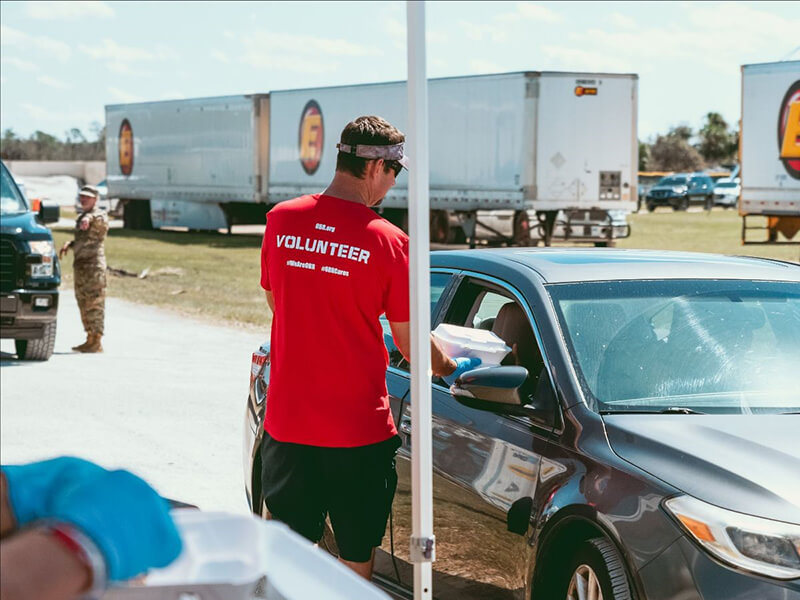 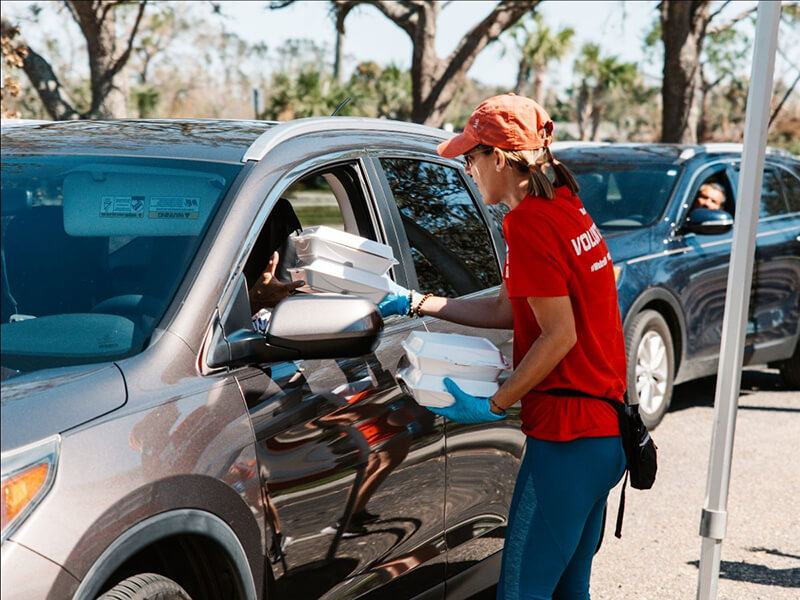 “My husband and I picked up meals from Operation BBQ Relief to feed two neighborhoods.  We shared the meals with elderly people and young people and the smiles on their faces were amazing. We were so excited. It was like handing them gold.

Thank you to all the wonderful people.”

“They are set up like a freaking city in a parking lot. This is Operation BBQ Relief. Please even if it’s $5, donate to them. We are overwhelmed at what they are doing. It’s mind boggling. We just picked up 150 meals and ten cases of water faster than any McDonalds has served us two burgers and a coke!

Operation BBQ Relief is here to share the healing power of BBQ.

Thank you for helping us provide hot BBQ meals to The Village of Holiday Lake impacted by Hurricane Ian.”

“From the bottom of our hearts here in Engelwood, Florida, we thank you for the hot meals!!! Everyone has been so exhausted that feeding ourselves is grueling.

We are a family of 8 who are homeless now.  2 of the 8 are Army veterans and we have 3 little ones.

Your hot meals brought many tears from us.”

Help share the healing power of BBQ!
Make new friends! Register to volunteer on the Operation BBQ Relief App
or sign-up at www.obr.org. 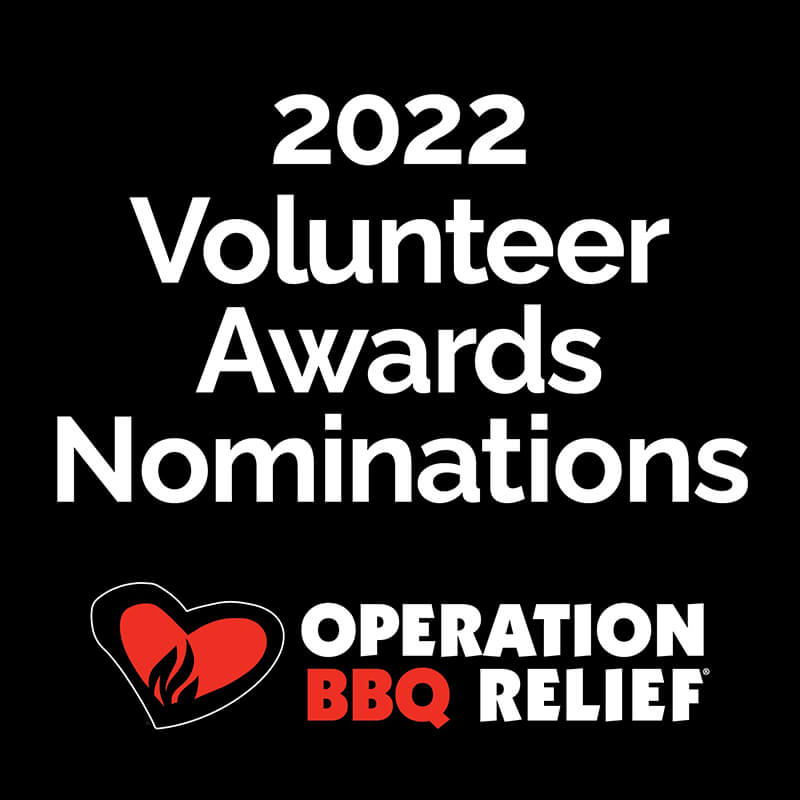 If you know an Operation BBQ Relief volunteer who has gone above and beyond this year, please recognize their efforts by clicking here to submit a 2022 Award Nomination for them! 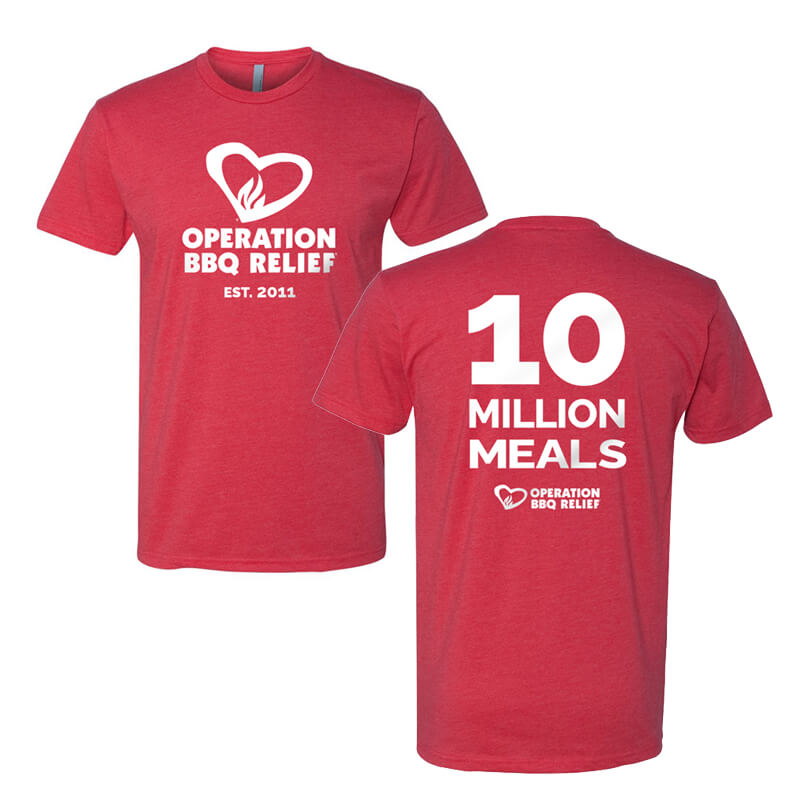 Celebrate 10 Million Meals with us!

Grilling with Golic and Hays Cookbook 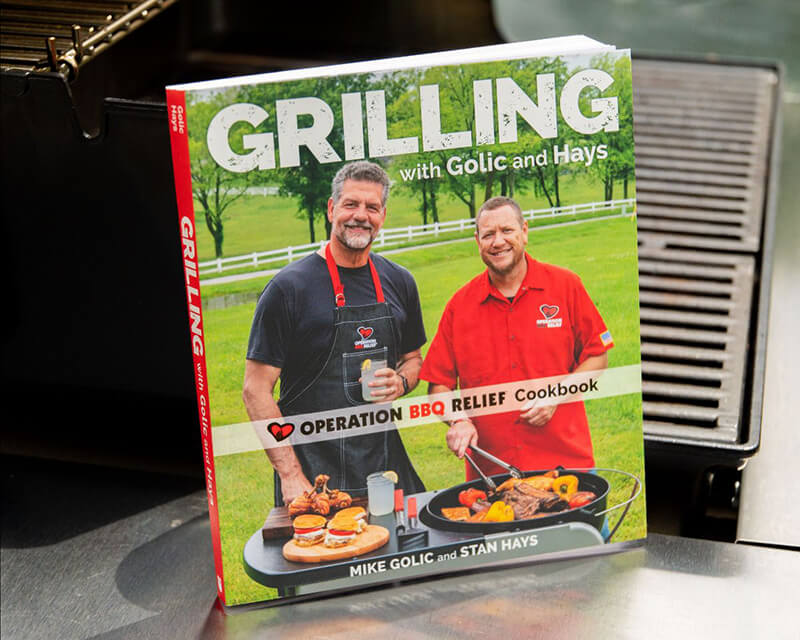 Stan Hays and Mike Golic teamed up with an incredible lineup of celebrity chefs, athletes, and coaches to present Grilling with Golic and Hays: Operation BBQ Relief Cookbook!