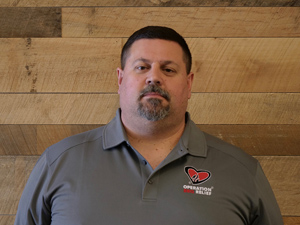 Operation BBQ Relief is pleased to announce Brian Polak as the new Head of Volunteer Services, effective February 22, 2020.  Brian’s responsibilities include developing and managing all aspects of volunteer engagement and coordination, including strategies to encourage new or increased volunteerism, standard operating procedures for volunteer management tasks, and more.  As a certified Project Management Professional (PMP)®, Brian brings over 20 years of project management experience to OBR.

Brian Polak has supported Operation BBQ Relief in one way or another since its inception in 2011.  After his first deployment to Washington, Illinois, following a 2013 tornado, Brian was determined to do more for the organization.  Brian always wears his OBR gear with pride and eagerly launches into his elevator pitch at the first inquiry of “What’s Operation BBQ Relief?”  As a KCBS Master Judge and competition Pitmaster for Designated Smokin’ Area, Brian always takes advantage of having captive audiences at BBQ competitions to be the quintessential OBR Ambassador.

Brian has served as the Illinois State Lead and later Territory 3 Director, where he worked to develop OBR fundraising opportunities at local BBQ competitions and retail events and served as Site Lead for the 2015 Kirkland/Fairdale deployment in Illinois. He then moved on to become the Director of Volunteer Management in 2017.  In that role he honed the process and tools for getting volunteers registered with Operation BBQ Relief and signed up for events.

Brian is a Sr. Program Manager at AT&T.  He is also a United States Army Veteran, where he worked military intelligence in Germany.  Brian and his wife of 21 years, Laurie, live in Carol Stream, IL, with their two Beagles.  They have two sons, Sean Dwyer (26) and Eric Dwyer (25), who also live in the area.

Join us in congratulating Brian on his new position!