CONNECT, INSPIRE, SERVE, EDUCATE, AND FEED THOSE IN NEED

We hope you and your family are doing okay during this difficult time for our country.  After discussion with our leadership team, Operation BBQ Relief will be deploying this week in response to COVID-19. As shelter orders are put in place throughout the country, there are shortages of supplies and volunteers for charities that need to rely on the bandwidth and resources of Operation BBQ Relief.  The pandemic is isolating and frightening for everyone and we hope that Operation BBQ Relief can ease some of the suffering of our most vulnerable populations.  We plan to start this week in Kansas City to feed veterans and the homeless. We will replicate this model of providing hot meals throughout the country while still being within the Center of Disease Control guidelines for group gatherings.

Operation BBQ Relief has been proactive to further our efforts to connect, inspire, serve, educate, and feed communities in need. We have started the process to build partnerships with restaurants, caterers, and food trucks. We have begun talking with key government officials on how Operation BBQ Relief could most effectively serve communities.

To be able to support communities through local restaurants, we will need to find more funding to do this.  We believe this approach is the best way to help many communities across the United States while supporting local businesses during this difficult time.  Please consider supporting Operation BBQ Relief as we provide hope and compassion through the healing power of BBQ.

I hope that we can synergize our efforts to address this critical need to feed our country during these challenging times.

As we help get food out to communities throughout the country, remember we can do more together than divided.

Thank you for your continued support. 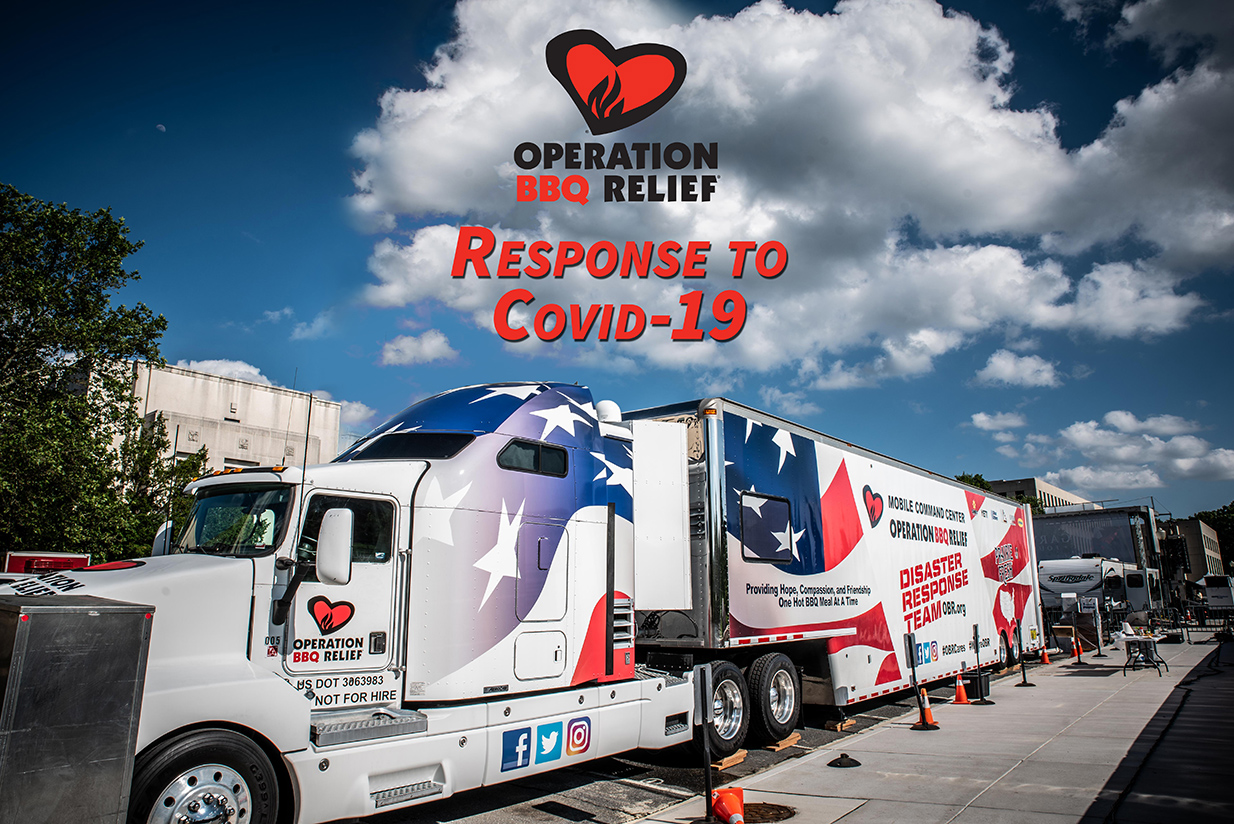 I hope this finds you and yours safe and sound. Our thoughts and prayers go out to everyone affected by the current situation across this wonderful nation.

Given the complexities involved, Operation BBQ Relief is cancelling the 2020 Breaking Bread Tour.

OBR will continue to conduct Disaster Operations for Covid-19 and other more traditional disasters on a case by case basis. All other OBR Non-Disaster Events are postponed through May 1, 2020.  We will continue to monitor the situation and make adjustments in accordance with current policy and health recommendations.

Thank you for all that you have done and continue to do as part of OBR. Our OBR family is a strong and compassionate community of difference makers. We must continue to connect, inspire, serve, and educate within our local communities – we are all in this together. 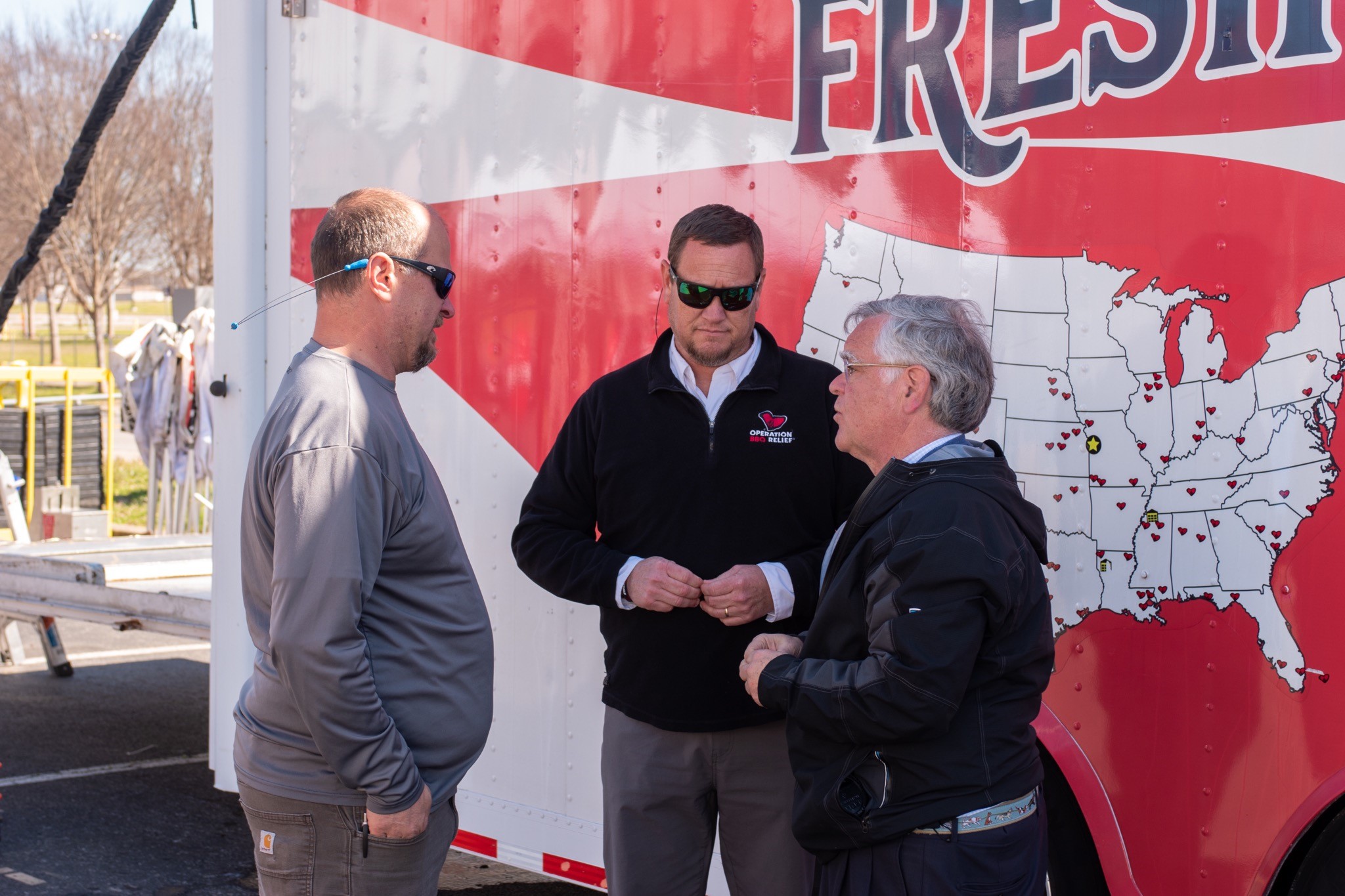 “I’m incredibly grateful to the organizers and volunteers at Operation BBQ Relief for their generous contributions to our community as we recover and rebuild after the devastating March 3rd tornado,” said John Cooper, Mayor of the Metropolitan Government of Nashville and Davidson County. “In times of hardship, Nashvillians have always been able to count on the support of our neighbors and friends. A hot meal, a warm smile, and a kind word can make a world of difference to those who are working to rebuild their homes and their communities.”

Operation BBQ Relief was fortunate to have the Tennessee Titans organization allow us to set up the command center outside Nissan Stadium.  For eight straight days, Operation BBQ Relief cooked BBQ around the clock and provided over 60,000 hot BBQ meals and donated another 60,000 uncooked meals to the city of Nashville and surrounding communities. Thank you to all our donors and volunteers that helped further our efforts to provide the healing power of BBQ. 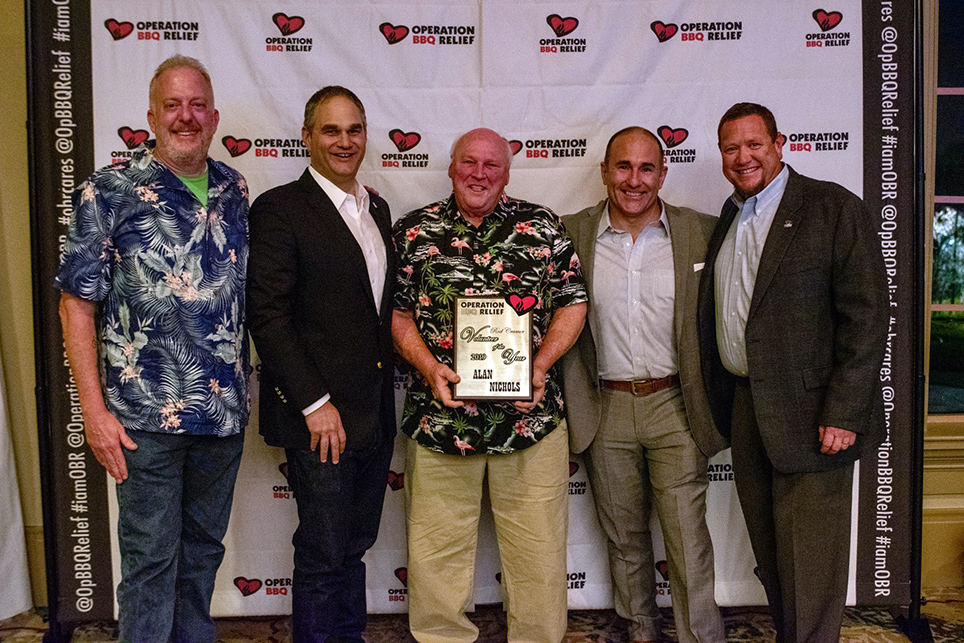 The Rod Cramer Volunteer of the Year: Alan Nichols

Alan is the epitome of a selfless volunteer.  He greets everyone with a smile and builds friendships with other volunteers.  During deployments and events, Alan leads volunteers through the task he’s charged with, teaching as he goes.  Alan is also the quintessential ambassador, representing OBR in any facet possible and promoting OBR far and wide.  To that end, he not only purchased the OBR cookbook, but also has worked his way through cooking various recipes from the cookbook, posting photos on social media, and telling folks how to purchase the cookbook.

Chris Wilson Sr., and his sons Chris Jr. and Joey, demonstrated an outstanding giving spirit time and time again throughout 2019.  They are among the first ones on-site every morning checking the pits, and the last to leave ensuring the overnight cook is good to go.  They’re a hard-working, fun-loving family that exemplifies an extraordinary level of giving to OBR and to their community and family. They’re not done until the job is done no matter how many hours it takes, and always with a smile and a laugh.

Mike Richter is a great motivator and caring person who helps keep the team motivated to keep pushing forward.  He is always willing to lend a hand, do a job when no one is watching, and he never shies away from a hard task.  Mike is quick to engage in conversation with each volunteer and offer assistance if someone needs it. Mike has made a remarkable impact on morale at OBR deployments and events.

Robert Lee has traveled from coast to coast driving the Operation BBQ Relief tractor trailer rig thousands of miles, hauling the Command Center or Boss Hogg.  He is willing to fly, drive and even take a train to move equipment on a moment’s notice, and always ensures the smokers and equipment arrive in a timely fashion.

Harry and Sharon first deployed to Tallahassee for the Hurricane Michael deployment.   Since then they have become OBR Superfans! They have since been engaged with other deployments and events all over the country.  From helping locally with The Always Serving Project in their community, to driving awareness and assisting OBR with earning top awards at the Florida Governors Hurricane Conference, to the Breaking Bread Tour in Hammond, LA, then deploying to Ft. Lauderdale for Hurricane Dorian, and helping in Atlanta at an awareness event.  They have jumped into OBR head-first and have immersed themselves in the OBR Way. Harry & Sharon epitomize what OBR is looking for in our volunteers.

Scott Guy is a hands-on volunteer in our Memphis warehouse who is always fixing and improving Operation BBQ Relief’s equipment. He hosts warehouse clean-up days and ensures OBR is always ready at a moment’s notice to load trucks and deploy.  He’s constantly working on inventing new things to help make volunteer tasks at deployments and events easier.

The Behind the Heart Award: Cheryl Baylie

Cheryl Baylie worked tirelessly, and often unseen, behind the scenes at OBR throughout 2019 to make the organization successful.  She was the driving force behind getting the Virtual Volunteer Team up and running. She recruited for that team, documented all the initial operating procedures for the team, personally trained all the team members, drove the creation of processes for data collection, and has gone out of her way to refine every aspect of the team.  The existence of the Virtual Volunteer Team in the manner it exists today is a direct result of Cheryl’s work.

Donnie Paul first got involved with Operation BBQ Relief as an attendee at a BBQ Basics event.  Having never owned a grill nor knowing how to BBQ, Donnie soaked up every bit of knowledge like a sponge.  He took that knowledge back to his family and his community. As a grass roots effort, Donnie and his BBQ Basics mentor, Shannon Vaughn, decided to cook and deliver food to first responders and veterans in his community once a month.

Brian Polak used his project management experience to support OBR’s growth as an organization by defining and standardizing processes and strengthening the Volunteer Management Team.  Brian works with Operations and Programs leaders to understand their needs and ensure they understand the needs of Volunteer Management. He works with IT to drive improvements in WebApp functionality, providing specific requirements and testing updated software.  He’s not afraid to ask the tough questions that drive cross-team dialogue and help OBR move in a positive direction. He is pro-active in his actions and is actively sought out for input on and handling of all aspects of Volunteer management and engagement.

“Culture” is defined as the characteristics and knowledge of a particular group of people. Culture is learned and shared, and that assimilation creates an integrated cultural shared by an even a larger demographic.

Whether it be at a deployment following a natural disaster or a program through The Always Serving Project, staff and volunteers play a key role in the culture at Operation BBQ Relief.  Within the OBR family, it’s safe to say that during an event or deployment, the overwhelming culture is one of “what can I do to help no matter how small or how big the ask?”. But during the hustle and bustle of our daily lives outside of OBR, we can easily forget that Operation BBQ Relief’s mission to “connect, inspire, and serve” actually applies in our daily lives, to how we treat our OBR family members on a daily basis, outside of event or deployment days.

Regardless of a person’s position or tenure, everyone in the OBR family is equally important.  Our tone, our smiles, and our outward attitudes can affect, both positively and negatively, others within OBR.  We all rely on each other to make this world a little bit better place. So it’s imperative that we treat each other with the same compassion and respect, whether in-person or on-line, that we afford those in the communities we connect, inspire, and serve.

How do we keep our OBR culture in our heart and minds daily and apply it both internally and externally on a daily basis?  When asked, one OBR leader said, “My personal culture I want to be a part of is one that will allow me to effect change, grow, be challenged, and feel a part of something bigger than myself.”  What is the culture you want to be a part of? 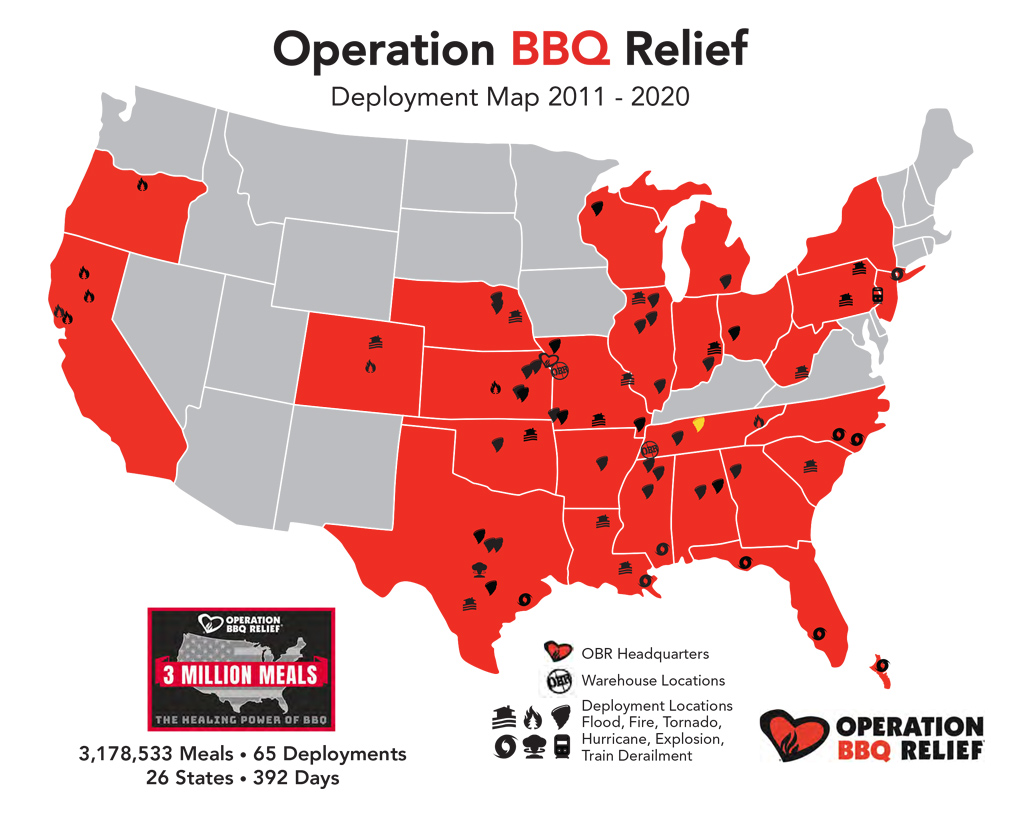 Interested in volunteering for an event, please email volunteer@operationbbqrelief.org for more information

Jonesboro, Arkansas (Tornado) / 1,000 Meals Over 2 Days
We use cookies that store information on your computer to give you the best online experience: Some are essential to make our site work properly; others help us improve the user experience.