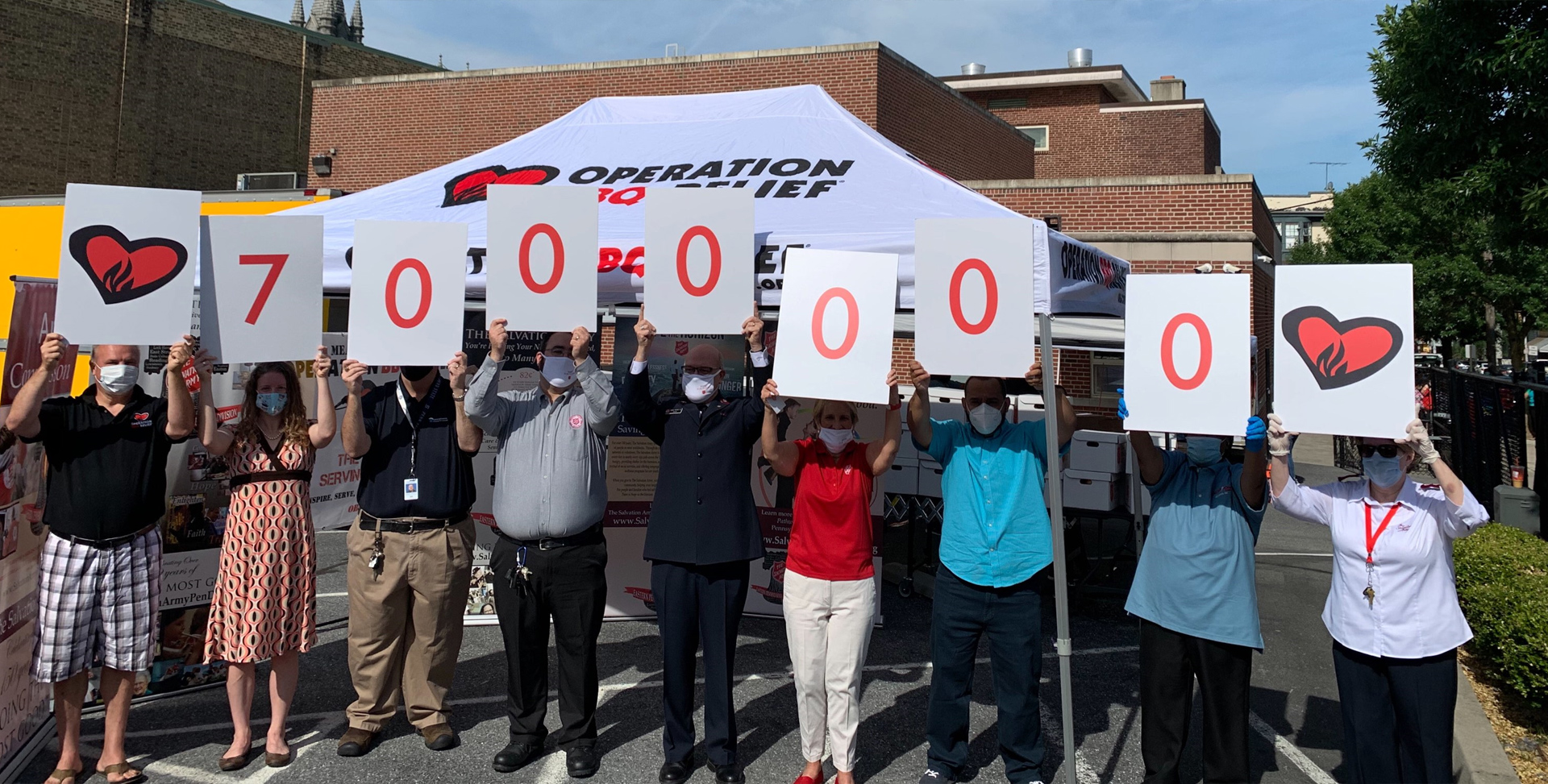 It has been over 3 months since Operation BBQ Relief began responding to the COVID-19 pandemic.  Our leadership team knew that we were going up against odds with shortages of volunteers, struggles in the economy, high rates of unemployment, and shelter only orders in place throughout the country.   Despite these challenges, the Operation BBQ Relief family pushed through and has served 4,436,345 meals.  While the numbers seem astronomical, it pales in comparison to the comfort and friendships formed in each community that Operation BBQ Relief has served.

Front line workers feel recharged after receiving hot BBQ meals during their lunch breaks.  Students are fed healthy meals after having their school closed abruptly in March.  The elderly and individuals with disabilities faced a new level of isolation but felt loved after receiving meals on their doorsteps.  Homeless veterans were fed by Operation BBQ Relief even when their existing meal programs were shut down.  Families who faced new challenges of unemployment experienced feelings of relief after receiving meals from Operation BBQ Relief.

A mother in Pennsylvania  wrote to Operation BBQ Relief and shared the following note, “My family fell on hard times due to COVID-19 and we were given two of your dinners. I want to tell you they were as good, if not better, than homemade and delicious! Thank you for all you folks are doing for us. I know my family of 8 appreciates it!”

Operation BBQ Relief will continue to respond to the pandemic as we have discussions with groups in Colorado, California, New Mexico, Arizona, and Navajo Nation.  We are grateful for the support we have received throughout the country.

A few days before Operation BBQ Relief began responding to the pandemic, I came across this quote from Mr. Rogers, “When I was a boy and I would see scary things in the news, my mother would say to me, ‘Look for the helpers. You will always find people who are helping.'”

I want to take the time to thank all the “helpers” that continue to jump through hoops to support Operation BBQ Relief in our efforts to connect, inspire, serve, educate, and feed families and communities in need. It is because of the helpers that we have been able to serve over 7 million meals since 2011.

Our best to you and your families. 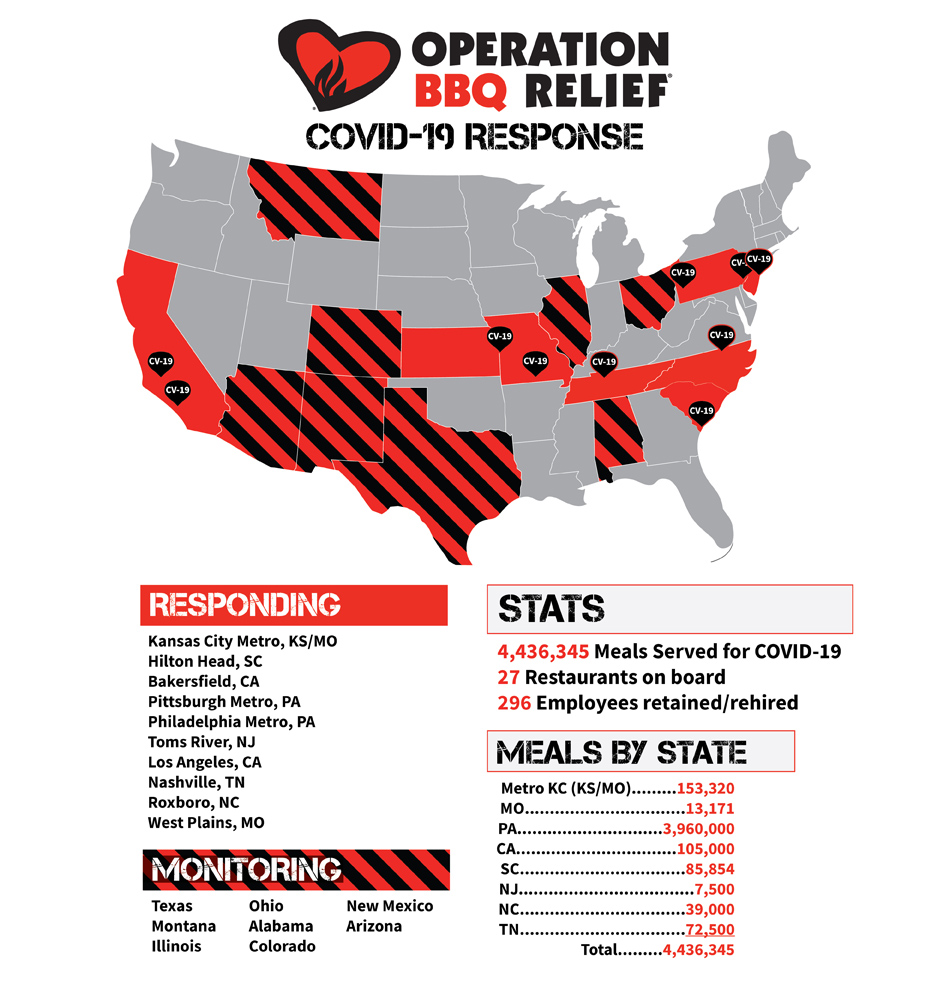 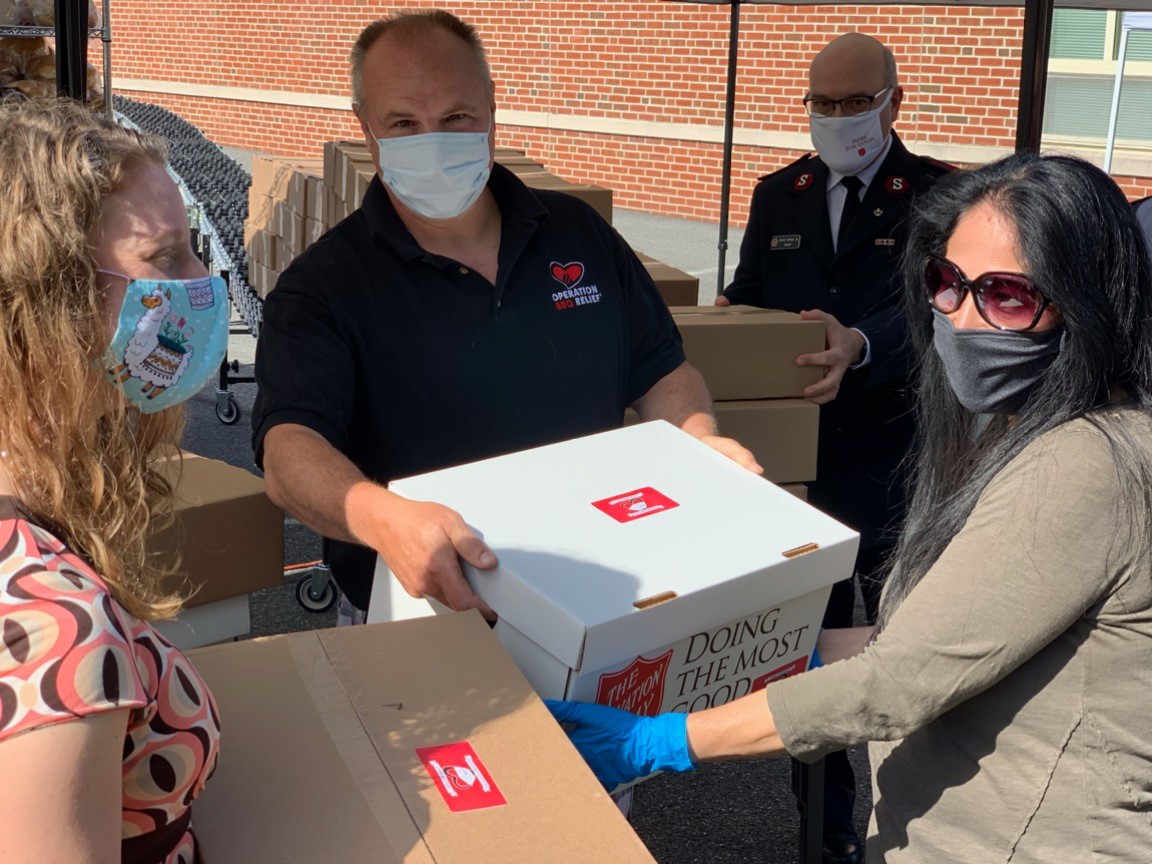 Operation BBQ Relief volunteer Doug Bomberger presented our 7 millionth meal to a mother in Reading, PA  that shared the impact of receiving meals during this time of uncertainty, “The meals have helped me with self-esteem, knowing that someone is out here and they care.  The meals have also helped my children feel wanted, they feel loved, they feel helped.”

Focusing on the Positives

During the past few months, our country has changed drastically and provoked our nation to think and act differently in response to change.  At Operation BBQ Relief, the change has ignited a fire in our organization to provide and serve more meals in the last three months than we could ever imagine.  In the midst of crisis, Operation BBQ Relief responded by connecting more, inspiring more, serving more, educating more, and feeding more.  By amplifying our efforts throughout the country, we have learned to love more and lead more with hearts of compassion. 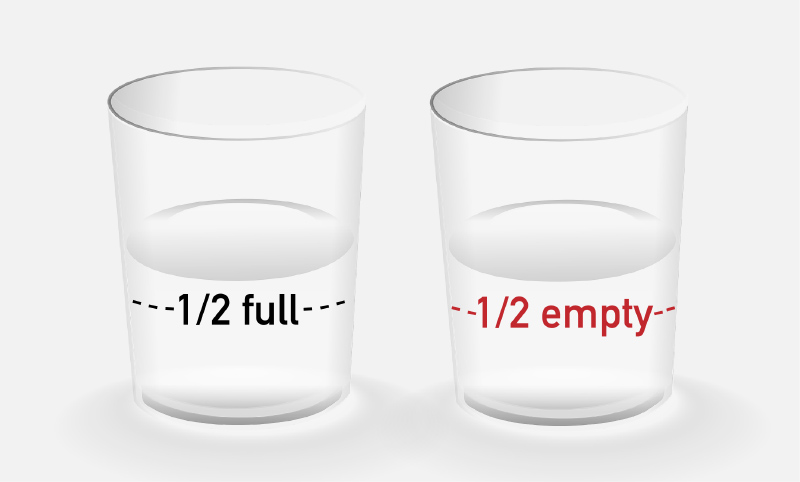 I have been doing a lot of reading around how we act, interpret, and focus our energies.  The Optimist Creed has become an inspiration for me as we unite as leaders at Operation BBQ Relief to provide the one hot meal that matters even through the challenges of the glass being half full.  I invite you to feel inspired to make a difference in the lives of others through Operation BBQ Relief or a local charity in your community.

As both an owner of DRJ Catering and a volunteer for Operation BBQ Relief over the last four years, David Keith finds a uniqueness in the barbecue culture that extends to the mission of Operation BBQ Relief.  He explains, “Every country in the world has some form of barbecue.  Not every country in the world has pizza, but every country has barbecue. Barbecue involves every walk of life and every experience. You can take a break from the world.  There’s no fighting, no politics. We are just people there wanting to help other people.”

David first heard of Operation BBQ Relief in his hometown after Hurricane Sandy in 2013. “My house was underwater so I couldn’t help them, but I heard about them. I vowed to help them and encountered them later at a BBQ show.”

David decided to carry through his promise and helped Operation BBQ Relief when a natural disaster struck North Carolina three years later. The rest is history. David continued with his catering business and is now the New Jersey Area Coordinator for Operation BBQ Relief.

Like many other restaurants around the country, the pandemic has certainly changed the dynamic of his business. David had to lay off all his employees, and for two months, he received few to no client calls. But just as Operation BBQ Relief helped his town when a natural disaster struck years ago, Operation Restaurant Relief saved his business while providing meals to the local community. Through the Operation Restaurant Relief program, David and his team provided 7500 meals to the community in Toms River, NJ.

With the pandemic affecting the country, there has been a large disconnect with individuals and the world. However, David has also seen a lot of the community that Operation BBQ Relief has fostered through its meal efforts. After going on multiple deployments and experiencing the hope the organization offers on both sides, he says, “I couldn’t think of being with a better group. If I left this group tomorrow, I would still have the life-long friends I made here.” 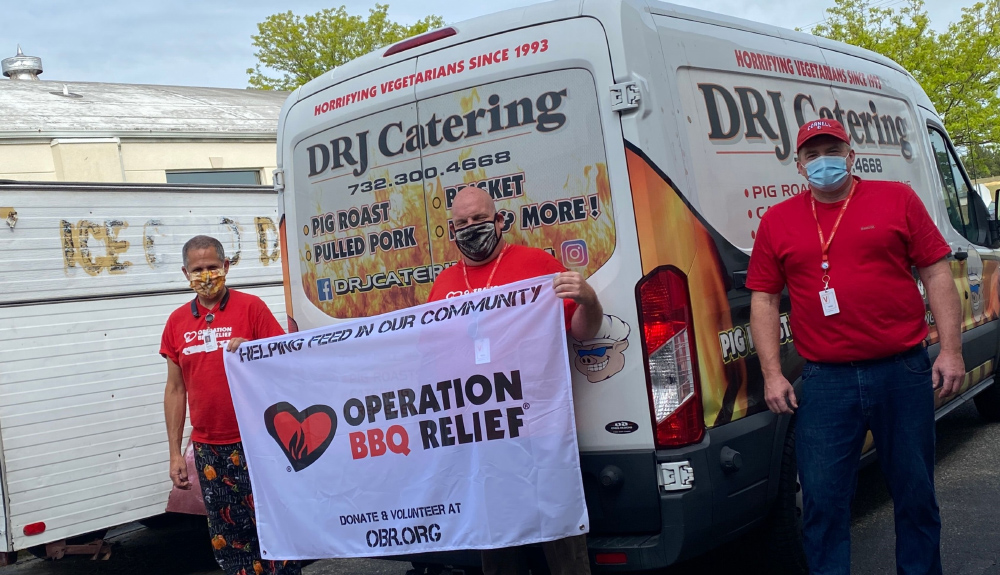 Don’t miss out! Purchase your Operation BBQ Relief face masks today! Face masks come in singles or packs of 4 and are available in adult and children’s sizes. 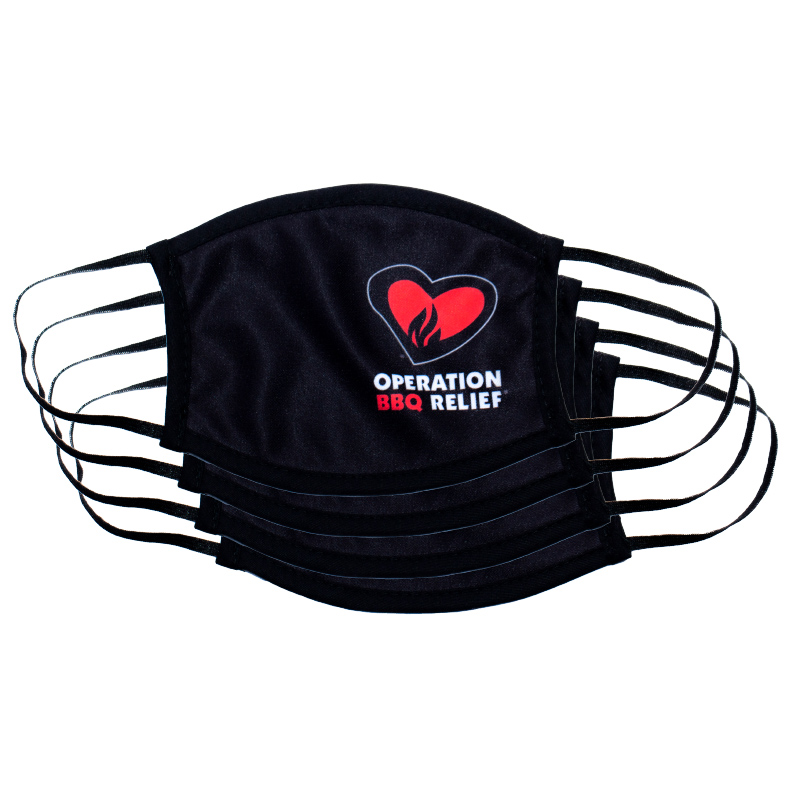 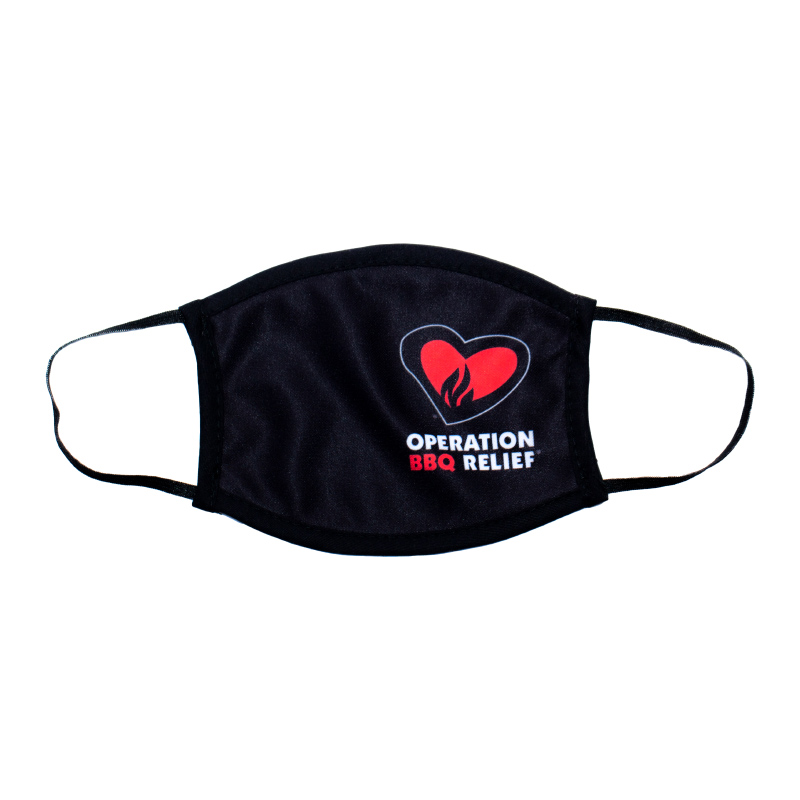 Post a picture of your favorite BBQ to #ShinerBBQ and tag @ShinerBeer in support of Operation BBQ Relief! For every post, Shiner Beer will donate $1 in support of our efforts to provide the one hot meal that matters to those in need. Campaign ends on August 31, 2020. For more information, click here.

Interested in volunteering for an event, please email volunteer@operationbbqrelief.org for more information

VOLUNTEER
Administrative Specialist
We use cookies that store information on your computer to give you the best online experience: Some are essential to make our site work properly; others help us improve the user experience.